Many yoga poses are named after cats and dogs….so it’s not a surprise that my dog thinks some poses are an invite for him to play with me. But he weighs almost as much as I do and he’s a leaner – so I have worked hard to teach him to be quiet and watch as I do yoga…

This “training” usually works in the summer as outside is much more entertaining than watching me – he has the neighbors convinced he lacks for food and attention :- ). But sometimes he just needs to be right at the edge of my mat watching….especially if I lie still on the mat [it’s called corpse pose for a reason]

I’ve tried telling him that yoga will keep me around longer so he need not worry that I am actually going to expire – but he doesn’t always listen – and when he worries himself enough – he lies on top of me or hits me with his paw…..The cat also sometimes decides that we can “share ” the mat…and when she tries that – the dog also wants to “share.” And – as It’s a normal sized yoga mat – guess who loses her space and can’t continue doing her yoga?

It’s fun to do yoga with pets around – it teaches lessons that I’m guessing the yogis probably never intended 🙂 or maybe they did?

When not on my yoga mat this is where they are:-)

Sam in his usual summer spot 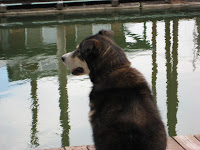 And Sheba in hers: 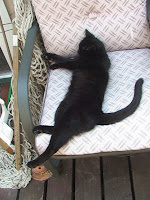