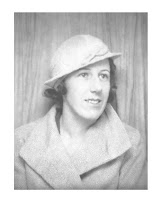 I have often wondered how she would have dealt with September 11, 2001 had she stayed alive for a bit longer. She who was born before we had planes, cars, skyscrapers, and the Internet, etc. and did not take a flight until in her 50’s, 60’s or thereabouts when she flew to Boston to visit me.

She was quite curious about the Internet and we had many conversations about what it was – but as she was legally blind by then, computers were never going to be part of her life.