One of my friends and I have talked about doing this circumnavigation and so on Tuesday we said – Thursday it is! [It was supposed to be a bit cloudy – it wasn’t :- )]

The trip around is about 12 miles or so and wasn’t a “walk in the park” or an easy kayak paddle! 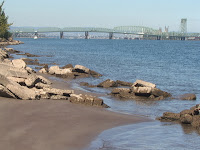 Here is a shot of the I-5 Bridge soon after we rounded the Eastern end of the Island.

This was the easier part…then we had to paddle to the Western end – all in the main channel of the Columbia River which has a strong current and much traffic. Neither of us had ever paddled on the North side of the Island – and it interesting to see the industry in both Portland and Vancouver and many of the barges at rest.

Nearing the Western end of the Island we encountered WAVES….we made it around but it was work! Not sure why waves but it has to do with the confluence of Willamette River and Columbia which is near there.

It was then definitely time for lunch, a swim and a long break…. 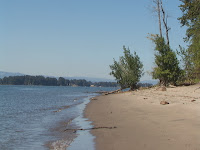 Lunch on the West end of Hayden Island.

After lunch we paddled back toward home – taking a break to get wet as it was very hot out on the river. [Winter seems like a good season for this trip when we do it again – especially a rainy winter day : -)]

When we saw the railroad bridge we cheered as we knew we were nearing home. As we passed under the I-5 bridge and got to see closer-up the familiar condos and floating homes – we knew we had done it!